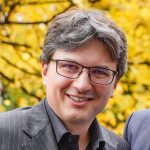 Prof. Tzoulis’ work has provided novel insights into the clinical spectrum and molecular pathogenesis of mitochondrial diseases and advanced the understanding of how dysfunction in mitochondria, the powerhouses of the cell, is involved in the pathogenesis of Parkinson’s disease and other neurodegenerative disorders10–16. For Tzoulis, the transition from mitochondrial disorders to PD came with the 2013 discovery that impaired mitochondrial DNA (mtDNA) homeostasis caused by mutations in the mitochondrial DNA polymerase (POLG) causes severe degeneration of the dopaminergic substantia nigra pars compacta (SNc), similar to that observed in individuals with PD2,17.

Subsequent work by the Neuromics team showed that mtDNA homeostasis does indeed play a central role in idiopathic PD. They showed that dopaminergic SNc neurons of healthy individuals compensate for the accumulation of age-dependent somatic mtDNA damage, by increasing their total mtDNA copy number. This essential protective mechanism fails in persons with PD resulting in gradual loss of their healthy mitochondrial DNA population. This, in turn, could predispose to energy deficiency, leakage of dangerous byproducts and neuronal damage10. Further work by Tzoulis’ team suggested that aberrant mtDNA homeostasis in PD may be partly mediated by a polygenic risk conferred by rare genetic variation in the genes encoding the mtDNA “homeosome” (i.e. proteins involved in mtDNA replication and repair)12.

While being an important piece of the puzzle, aberrant mtDNA maintenance is but one of many facets of mitochondrial dysfunction in PD. In 2017, the Neuromics team discovered that deficiency of the mitochondrial respiratory complex I, an established feature in the SNc of individuals with PD, is a widespread – nearly global – phenomenon in the PD brain. Intriguingly, complex I deficiency does not correlate with mtDNA damage suggesting it has a different (mtDNA independent) origin. Moreover, an inverse association between complex I deficiency and α-synuclein pathology suggested that these two pathological hallmarks of PD may be linked11

These findings, along with rapidly accumulating additional evidence by others in the field, place mitochondria at the very center of the molecular pathogenesis of PD and highlight a central need to increase our understanding of the underlying processes. Inspired by this growing body of evidence, Tzoulis’ team has now turned to mitochondria as a therapeutic target in PD.

Indeed, registry-based retrospective epidemiological studies by Tzoulis’ team and others show that drugs stimulating mitochondrial biogenesis and function reduce the risk for Parkinson’s disease18–20. Encouraging as these findings may be, a clinical trial using one of the aforementioned targeting mitochondria failed to produce a clinical effect. Tzoulis believes that this may be due to the vast biological heterogeneity of PD. Preliminary findings by the Neuromics group, suggest that mitochondrial dysfunction may be a central feature in some, but not all, individuals with PD. Thus it is plausible that only a subgroup of patients would benefit from therapies targeting mitochondria.  Detecting subgroup-specific effects in heterogeneous populations requires very large samples, which are typically not feasible in early phase clinical trials. There is therefore an unmet need for biomarkers enabling selection of PD patients with mitochondrial (and other) molecular defects for targeted trials.

Developing and testing mitochondrial therapies as well as biomarkers for patient selection is a central aim of the Neuro-SysMed work led by Prof. Tzoulis. A detailed description of the ongoing and planned work can be found in the section for Parkinson’s disease below.