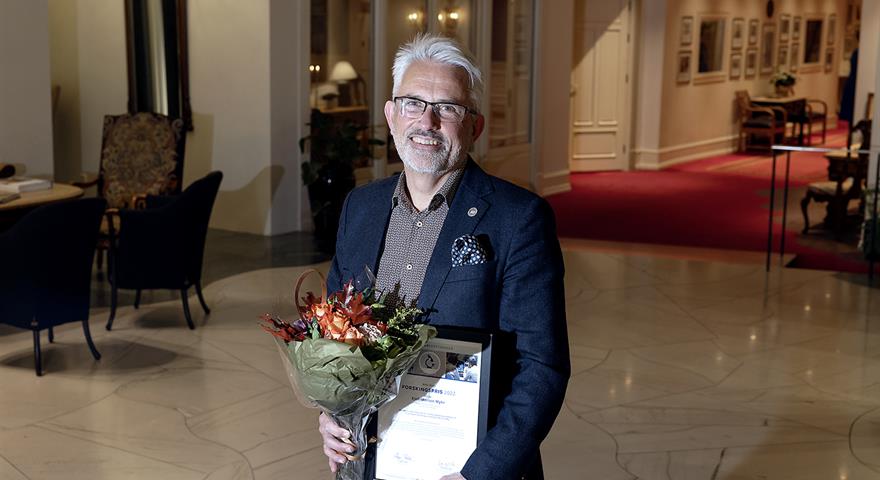 Helse Vest, the regional health authorities, has recently announced their 2022 awards, where Kjell-Morten Myhr received the Research Award 2022 for his outstanding work on Multiple Sclerosis research.

Kjell-Morten Myhr is a professor at the University of Bergen, Department of Clinical Medicine, a senior consultant at Haukeland University Hospital, and Director of Neuro-SysMed, a Norwegian Centre of Excellence for clinical treatment research focusing on multiple sclerosis (MS), Parkinson’s disease (PD), amyotrophic lateral sclerosis (ALS) and dementia.

In the committee’s reasoning, they highlight that Myhr has been a pioneer in MS research, with research that has made a significant improvement on life expectancy and quality of life for the MS patients.​​ The award amounts to NOK 200,000 to be used for further research, and the award also includes a work of art.

A recognition to the Norwegian neurology community

“I am immensely happy for this award, and I will extend my gratitude to the patients who we have followed up over the years,” Myhr says.

“This is a great recognition, not only for me, but also for the entire neurology community in Norway. ​In the past, MS patients could die after 5-10 years. Now, we are often able to diagnose early and start treatment early enough to stop the disease or slow it down considerably,” Myhr concludes.

You can read more about the Neuro-SysMed research activities here.

You can read about the awardees of the other two awards, the Innovation Award and the Young Researcher Award on the Helse Vest pages (in Norwegian) or in Bergens Tidende.